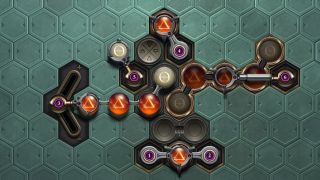 Update: After failing GOG’s idiosyncratic internal curation system earlier this year, Zachtronics’ Opus Magnum was denied access to the CD Projekt-owned digital storefront. As outlined in our original story below, the process appeared as confusing as it did complicated—particularly given the quality of the game in question.

Now, GOG has reversed its decision. “We did it! You did it! And then we did it! It’s good to finally have the brilliant-yet-approachable Opus Magnum,” reads this tweet, before pointing those interested towards the game’s newly-launched store page and a limited-time ten percent discount.

When quizzed about its U-turn, GOG followed up by saying that despite its curation process, it does take what its community wants into consideration with every decision.

Another tweet reads: “The game’s outstanding quality and community demand speak loudly and clearly—we’re human, we’re not infallible, but we’re also not immovable. It’s great that we get to listen, reevaluate, and bring Opus Magnum’s to our catalog in the end—it’s every bit worth it.”

Opus Magnum, the latest puzzle game from Zach ‘Zachtronics’ Barth, received one of our highest review scores in 2017. Alex gave it a 91, calling it “one of the very best puzzle games of the year, if not the decade.” It’s somewhat surprising, then, that it was rejected by game distributor GOG.

In a recent tweet, Barth shared a statement sent by GOG, which explains that Opus Magnum hasn’t appeared on the storefront because it “did not pass [GOG’s] internal curation system.” Further explaining its position, GOG wrote:

“We take into consideration many other factors than just the actual game itself—the reviews we provide for example do not review the game in general; so like an objective game review like on PC Gamer or what not—but we do it from the angle of our entire user-base.”

I reached out to GOG for clarification, and the company confirmed the statement Barth posted is legitimate, adding that they “don’t want to comment further on it.”

Opus Magnum’s rejection sparked a debate around how videogame storefronts are curated, with Steam’s much-maligned Direct program serving as a counterpoint. Naturally, some backed up Opus Magnum, while others argued that missing a gem or two is a small price to pay for weeding out the sort of shovelware that routinely clogs Steam’s new release page.

Full EVO 2018 Schedule: When Does It Start, How To Watch It

Facebook made a camera system that can make better virtual mirrors

We Get Another Look At Persona Q2 With A New Trailer

Gamasutra: Nick Yee’s Blog – What Men and Women Consider Hardcore Gaming Are Not The Same